Listen via iTunes or Stitcher

Roger Montgomery ( @montgomeryroger ) is a value investor, hedge fund manager and best selling author in Australia. Although this is a shorter episode than normal, I couldn’t turn down the opportunity for a couple of reasons: My admiration for Roger’s innate sense of what it takes to find value in Australian businesses, and my desire to introduce you to the world of value investing being in the back of my mind since starting the podcast.

Roger typifies the mindset and respect that value investing commands of an individual - the success of Montgomery Investment Management and its ownership by staff is a testament to that. He believes, like his mother, that “if you can’t afford to pay in cash, then you don’t deserve to have it”, which is something that is often lost on debt hungry Australians. There is a notion in value investing that you're often operating on a far greater timeline than most, and Roger’s patience is something that I’ve always respected for someone in the Australian market. So what is value investing and why is it important?

Value Investing is an investing paradigm created by Benjamin Graham & David Dodd at the Columbia University Business School in New York, and popularised by Warren Buffett. In the early 20th century it was an opposing view to the more common paradigm of Efficient Market Theory - that the market and its price are always fair value, based on currently available information. Value investing alternatively shows that the market price is never a reflection of the intrinsic value, and therefore you can buy undervalued companies.

My own discovery of value investing was after losing $4,000 speculating on oil futures at university, a massive amount of money for me at the time. I lost the will to invest for six months after that loss, but soon found a book called “What I Learned Losing A Million Dollars” by Jim Paul and Brendan Moynihan. In that book I found not only the reasons why speculators continually lose money, but also the chart below. 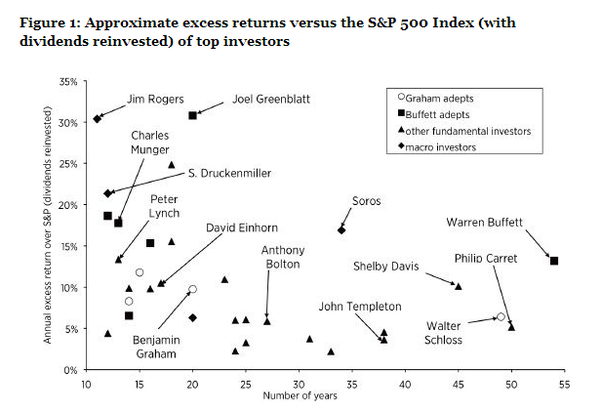 The chart shows excess returns to the S&P 500 Index for investors, while also displaying the type of paradigm they follow. What was fascinating to me at the time, was that they were almost all various forms of “Value Investors” - except for George Soros, Jim Rogers, and Stanley Druckenmiller. But what was more remarkable to me, was the longevity with which most of the value investors had, particularly the older investors like Warren Buffett, Walter Schloss and Philip Caret. It was this discovery in 2012 that set off a long period of reading and learning - I read nearly every book on the topic available through Amazon and found copious white papers by these famous investors that defined the paradigm. Since that time, I’ve never experienced a major capital loss, and have consistently compounded my money, to the point that I’m confident in its efficacy. Perhaps now you understand why I believe Roger’s episode was so important, particularly for those listening and reading, that have considered investing in the past. Too often people make investing decisions on price, and not on the value they can get. For some of the younger listeners that are also struggling with the reality of buying a house, you may enjoy the tangent we go on related to housing affordability and pricing in Australia.

Key topics we discussed in this 30 minute interview were:

Select things mentioned in the episode